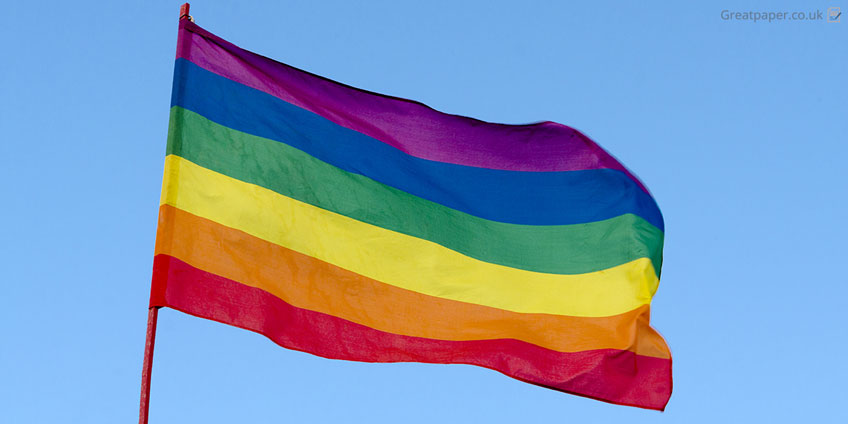 LGBT rights have been at the forefront of public attention for the past couple years. Starting with the legalization of same-sex marriage in 2015, attempts have been made to expand their rights. Most of them have been successful, however, the transition from denial to acceptance is not going to happen overnight.

There are still many issues LGBT people face on a daily basis. From not being able to order a wedding cake as a gay couple in Kansas to fearing death penalties in 8 states – the punishment varies depending on how lucky you were to be born in the right country. Thus, this topic is perfect for writing a research paper, as it is very relevant and contentious, at the same time offering the abundance of research.

Here you will need to be very careful. Even if you are personally against gay marriages, you cannot just use your opinion as a basis here. Because it is a controversial, thus, a sensitive issue for most people, you have to use exceptionally careful wording underpinned by reliable research even on this initial stage.

I support the LGBT rights fully, but you may not share my stance. Your opinion is not what is going to affect your grade (unless your teacher is fatally biased, of course). It is the professionalism with which you are going to approach this task. First of all, maintain a neutral tone. Remember a research paper is not an article – it is, definitely, not the right place for the inflammatory language.

Second of all, collect enough research from reliable unprejudiced sources (preferably scholarly ones or really trustworthy magazines like the New York Times). It will help you decide whether the topic is worth pursuing. Thirdly, be open-minded. Do not discard credible sources only because they do not support your thesis. Try to find counter-arguments to dispel their conclusions. If it is not possible, acknowledge this flaw in your research. Do not underestimate your colleagues. They are bound to ask you questions which would put you between a rock and a hard place. Integrity is a buffer you can use to shield yourself from those attacks.

In the extreme case, you may even decide to change your topic. However, it is always better to choose something you truly support. It does not mean that you can just give way to your inner fears and biases. It is important to find a topic which both supports your opinions and has enough credible sources. Do not pick a topic which cannot be argued using scholarly research. Be passionate and sensible at the same time.

Even if you want to focus just on the US, it is always a good idea to sprinkle in some world tendencies for comparison and perspective. So, for instance, did you know that the Netherlands legalized same-sex marriage in 2001? The US accomplishment does not seem as impressive when compared to the other countries. However, those facts should not be used to diminish the victory of the same-sex marriage in 2015. It is more reasonable and sciencey to evaluate the factors which contributed to this difference between the two countries.

Western Europe is, in general, leading the world struggle for the LGBT community rights, with Malta and Norway being the frontrunners (88 and 78 % respectively). However, you can almost see the curve falling as you move closer to the East. For instance, the post-Soviet countries such as Russia, Ukraine and Belarus have the tolerance results varying between 6-20 % while the US picks at 62 %. The human rights situation tends to improve yearly in the more open democratic societies while it deteriorates in those more closed. Thus, in Russia this indicator has been dropping continuously after passing the notorious gay propaganda law.

The law forbids gay propaganda to the young people. With country being on the guard for the so-called “traditional values,” it is hard for its people to look at the situation from a different perspective. Even though such broad evaluation seems to be redundant if you are focusing on more specific issues, it helps your reader to understand the status quo and formulate their opinions based upon it.

Use the Relevant and Current Research

Because it is not a controversial and timely issue, the situation around it alters almost daily. Thus, you need to be careful not to cite outdated facts in your research paper. For instance, if you have a source from 2016 telling you that Germany has not legalized same-sex marriage – do not get angry so fast. Go check later materials, and you will see that it actually did in summer 2017.

LGBT rights is a very unstable issue. You may even need to double check all the facts before submitting a paper if a significant amount of time passed since you started. It, however, should not prevent you from picking this domain if you truly care. You will just need to be a little bit more meticulous, that is all.

Here I will provide some updates in regards to LGBT rights which happened throughout 2017 and could be used as a topic for your research paper.

First of all, in July 2017 the president lashed out at the transgender community banning them from serving in the military via Twitter. Even though this haphazard decision was quickly ruled out in the court – the bad after-taste remained. It is clear that the new Republican Congress does not show support for the Obama-era regulations in favor of the LGBT community. This does not bode well for the movement upon the whole.

An unexpected backstab came from the US Justice Department with the Attorney General Jeff Sessions in the avant-garde. They maintained that the Civil Rights Act of 1964 did not protect people from getting fired based upon their sexual orientation. They basically interfered with an ordinary court case which lasted from 2010 to state their position. Although, the 1964 Act does not mention the orientation specifically, it does mention sex as one of the forbidden caused for discrimination. This interpretation is customarily used by judges as an excuse to rule in favor of a plaintiff.

The Trump administration does seem to be as homophobic as ever. Trump even hired the openly anti-gay man Sam Brownback to be an ambassador at large advocating for religious freedom. This tendency is alarming for LGBT people as well as their supporters.

In the conclusion to your research paper you need to summarize your findings as well as reiterate your position. Here you can also express prognoses for the future. For instance, you may argue that despite the White House preferences, the LGBT rights movement is only going to gain momentum. This can be indicated by real life examples where people on the local level managed to foster change which would be unthought of just a couple years ago.

More than 20 states passed laws banning employment discrimination based on the sexual orientation. It does not seem as good enough considering there are 50 states. However, every year statistics shows an increase in tolerance levels towards the LGBT community. Thus, it gives hope that policy makers will at some point listen to the majority of the US population and alter their ways to serve the people rather than their selfish and often outdated beliefs.