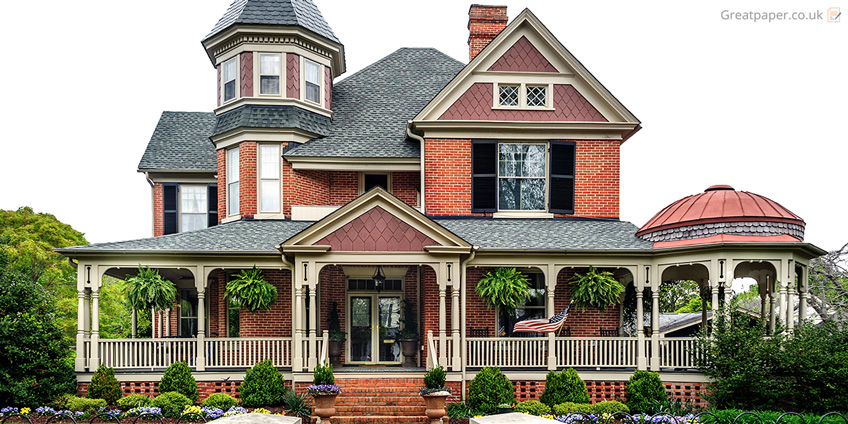 Jane Eyre, a novel by Charlotte Bronte, was published in 1847, and immediately gained widespread popularity and critical acclaim. It had both romance as well as social criticism, thus, being interesting for all kinds of people.

In this article I will explore why this book is still relevant nowadays, which, hopefully, will provide you with a solid basis for writing a book review which will earn you a perfect grade in the university.

The Context and the Overview

Charlotte Bronte together with her sisters Emily and Anne was quite a phenomenon for her century. First of all, she was a female writer, which was a nuisance in the Victorian era. Second of all, she was a very good female writer who was one of the first to draw attention to the consciousness of her characters rather than events of the novel.

Jane Eyre is not just a romance story, although, I must admit that when I first read it (still in the middle school), this is exactly how I perceived it. It could, of course, explain such an impressive popularity, but it would also give very little credit the depth and complexity of the author’s intentions.

Charlotte Bronte infused her book with potent social criticism which permeates the life of its protagonist – Jane Eyre. Jane is an intelligent and brave woman, who had to endure much oppression, thus, becoming alienated from the society. Despite the hardship, she retains both a strong moral principle and passion for life. The hard part is to find the right balance between the two.

Jane, much like in real life, is surrounded by kind and cruel people, forced to make difficult choices, which, however, lead to a quite fortunate outcome. She is not a typical woman of her generation, in this way challenging the preconceived notions about womanhood and the gender roles in the Victorian society.

The reader can really emerge into the story of Jane Eyre, observing her evolution from a wild, apprehensive child to a self-sufficient and strong woman. This is a classical Bildungsroman, or a novel in which the author describes a person’s growth and maturation.

Jane Eyre can be split into five parts. Each stage marks a period in the protagonist’s development. For instance, when Jane is at Gateshead, she is just an innocent child, who, however, has an ingrained sense of self-worth rebelling against the unfair treatment and cruelty of her aunt and cousins. She does not yet have a clear understanding of her anger and its origin, but she knows the injustice when she sees it. This, of course, causes her exile to Lowood School, where she is further molded.

There Jane improves her intelligence and erudition, which makes her reconsider her social position. She is smart, but poor, having to make living by teaching. Jane seeks change, which inspires her to leave Lowood and move to Thornfield, where she meets Edward Rochester. This is where the third stage of her development starts.

They fall in love, but at the day of their wedding Jane finds out that Edward is married. She leaves him, but only to become even more independent and experienced as a teacher at Morton school. Jane receives the unexpected inheritance and one more marriage proposal. However, after this fourth period of her life, she decides to move on to the last one, reuniting with Mr. Rochester.

It is clear that in the book review you are not going to retell the book’s plot, but rather focus on its analysis and the overall quality. This is where the understanding of its most prominent themes comes in handy.

First of all, it is the critique of the social and, in particular, the gender hierarchy. Although Jane Eyre is portrayed as equal to Edward in her wit and intelligence, she obviously does not have the same prospects for success as him. Jane has to work hard to sustain herself, while her employer does not just because he was born in the right family. Moreover, she has to prove herself constantly getting into philosophical debates with Edward, thus, showing that she is just as intellectually adept as he is.

Second of all, it is the take on religion which is being evaluated. At Lowood Jane encounters the hypocritical approach to faith in the attitude of her headmaster Mr. Brocklehurst. He makes others live in misery and privation while enjoying a lavish lifestyle. Jane despises this kind of approach as it goes against her innate kindness and morality.

Helen Burns, her best friend at school, represents a passive tolerance and acceptance which is so praised in Christianity. Even though Jane has the utmost love and reverence to her friend, she discards this way of thinking as unrealistic and detrimental to a person’s happiness. Finally, St. John’s religious fervor is instilled with ambition and pragmatism. Jane shares her friend’s benevolent aspirations, but cannot adopt the same level-headed perspective. She is full of passion which cannot be tamed.

Thirdly, the theme of independence versus love comes in place. Jane has feelings for Edward, but wants their marriage to be a partnership rather than a dependency. She only agrees to tie the knot when she becomes a wealthy and self-sustained woman, denying it otherwise. It was a revolutionary stance for the Victorian period as a woman was supposed to be subordinate to her man at that time. Thus, Bronte challenged the traditional idea of marriage, at the same time elevating the status of a woman in her book.

One of the first symbols the reader would spot in the novel is the red room. This is where Jane’s uncle died, and this is where she presumably sees his ghost. Red is a color of passion, while a room represents an enclosed space, which is where Jane finds herself, unable to give way to her inner spirit. A red room is like an epitome of Jane Eyre’s world perception, in which her adamant nature has to linger in the chains of societal constraints.

Another powerful symbol is, definitely, the figure of Bertha Mason, Edward’s insane wife. On the one hand, she is the physical embodiment of Jane’s rage against the systematic denial of her intellectual capacity and equality. On the other hand, it is a critique of the English imperialistic policy, which defied other nations’ rights for self-determination and autonomous existence. Bertha was Creole, and she was mad, being confined in the house of an English man.

The whole book has a distinct Gothic atmosphere. The dark, shadowed mansions, fiendish laughter and, of course, ghosts – those are the elements typical of this style. It adds to a more austere, dark nature of the book, making it more exciting to read.

Jane as well as Edward is described as having a fiery personality. Even though she finds it hard to balance between her desire for love and the sense of what is right and wrong, she knows that she managed to find her soul-mate.

At the end of the book review you are supposed to either recommend the novel, or tell the reader to avoid it like plague. In case of Jane Eyre, I think anybody (especially women) would be able to enjoy it. Not only because it has romance in it, but more because it is a great reminder of how many bridges have already been crossed for women to enjoy the same (or similar) rights as men, for people of any social beginning to even have a chance in life and for the conventional wisdom to lose its reputation.